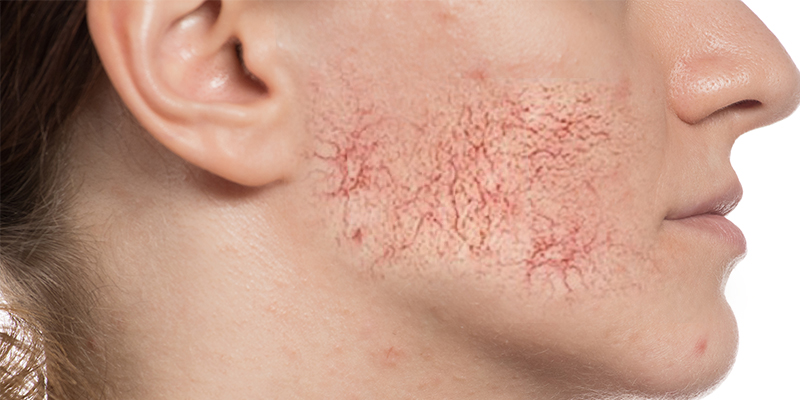 Sometimes the veins seem to become more visible in a certain section of your face. They have a web like appearance and seem to be branching out. Application of pressure makes them disappear but also causes mild pain and discomfort. It is likely that these visible veins are spider veins, which are medically known as telangiectasia. They are common and can also be treated effectively and easily.

What Is Telangiectasia Or Spider Veins?

Telangiectasias are common on the visible areas of the body such as the cheeks, chin, around the nose, lips, etc. Spider veins on legs are also fairly common with higher incidence seen among men and women above the age of 50 years.

Also Read: What Is Spider Angioma?

Spider veins or telangiectasia can be caused due to genetic causes as well as acquired or environmental causes. A combination of these causes can also exist. Common telangiectasia causes include –

Based on the appearance of the spider veins, telangiectasia is classified into the following types –

Depending on the location of the telangiectasia, different names have also been given which can be considered as another classification. Commonly seen types of telangiectasia in different locations are as follows –

Also Read: What Are Dark Spots On Face?

The symptoms of spider veins are –

The first and foremost diagnosis for spider veins is by evaluating the clinical appearance of the condition of the skin. The dermatologist will examine your skin and also note down your medical history to understand the cause of the disease. Since telangiectasia can be associated with serious disorders, a detailed diagnosis can also be performed in addition to an analysis of your family history of the skin condition. Diagnostic tests that are often used include –

Be it due to cosmetic reasons or because of the requirement to treat telangiectasia due to the underlying genetic condition, spider veins treatment is performed using various techniques to avoid bleeding and reduce the appearance of the thread veins.

This involves injecting a chemical solution into the affected skin. The chemical causes the formation of a blood clot that leads to the capillaries thickening or collapsing. Eventually, the superficial appearance of the blood vessels is reduced and the skin returns to its normal look. Spider veins on legs are often treated with this therapy. Multiple injections can be required depending on the dosage of the medication for spider veins that is being used.

A few complications have been associated with sclerotherapy due to the chemical travelling to other regions of the body through the circulation. In very rare cases, strokes and ischemic attacks were also caused.

The energy from the laser light is targeted only on the affected blood vessels to seal them off. Sealing the vessels will restrict blood flow to them and ultimately cause them to dissolve and disappear. Some pain might be associated with this cosmetic spider vein treatment but is manageable using numbing agents. Depending on the intensity and frequency of the telangiectasias, a few sessions of laser therapy may be required. This treatment option is the most viable to get rid of spider veins from the face (nose, cheeks, etc.) and other prominent locations because of the short healing time and efficacy.

In some cases, surgery to remove the spider veins may be required so that internal bleeding can be avoided. Further complications can easily be prevented this way, especially when the spider veins are present in or near vital organs. Surgery is a painful procedure that is associated with longer healing time. Hemorrhagic telangiectasia treatment often involves surgery.

What Are The Before And After Results?

Also Read: How To Take Care Of Skin From Sun?

Many factors associated with telangiectasia are not under our control. However, there are still measures you can undertake to prevent spider veins from developing –

Also Read: How To Find A Dermatologist?

People who sit or stand for long periods, are exposed to sunlight repeatedly, are pregnant, are overweight, have a family history of telangiectasia, alcohol abuse or smoking, use topical corticosteroids, are elderly or have existing skin conditions like rosacea and dermatomyositis; are at a higher risk of contracting telangiectasia.

Also Read: What Is Melanocytic Nevus?

Yes, spider veins can be genetic in many cases. You can inherit the condition from either of your parents.

Spider veins or telangiectasias are benign in most situations. The discomfort caused by them is more of a cosmetic concern due to their development in prominent locations. A consultation with a dermatologist will help you to understand the cause and also undergo differential diagnosis to check for any underlying diseases that may cause it. Appropriate treatment can then be undertaken to reduce the thread veins appearance seen superficially and also avoid further complications.

An MBA by chance, a trainer by passion, a psychologist by interest and a voracious reader by parentage. I enjoy traveling, public speaking, exploring and writing on topics relevant to our health and well-being.