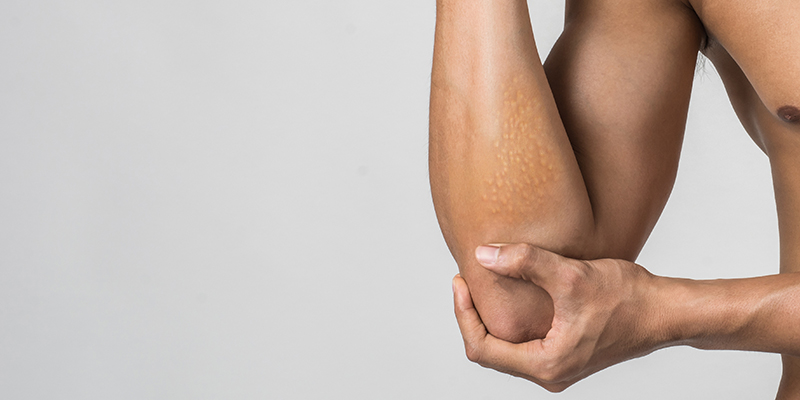 Yellow coloured nodules or patches are often seen around the eyes, elbows, knees, face, and neck, and can indicate a serious underlying health condition that has impacted the metabolism of fat in the body. Xanthomas or xanthomatosis is a term used to describe such patches or deposits. Instant treatment is necessary under the supervision of a doctor and a dermatologist to stop the skin concern from going beyond control.

When fatty deposits accumulate in the body and develop into firm nodules under the skin that are yellowish in colour, the condition is termed as Xanthomatosis. The deposits are called as xanthomas or xanthomata. It is a harmless tissue that grows beyond the normal levels and causes the formation of nodules.

Xanthoma histology indicates that the deposits are made up of histiocytes that contain high levels of lipid material in their cytoplasm. They appear yellowish or even orange on the skin’s surface with the size of the nodule varying widely. Usually, no pain is associated and these deposits are often found in clusters under the skin.

Also Read: Consult A Dermatologist To Get Rid Of Xanthoma

The classification for the types of xanthomas is based on the location it develops at and also how it develops. Here are the various types –

Also Read: How To Get Flawless Skin?

These fat deposits are caused to increased fat levels in the body, which can be caused by underlying diseases or conditions like –

Also Read: What Is Melasma?

How To Get Rid Of Xanthomas?

To get rid of xanthomata deposits from under the skin, the underlying disease has to be treated. Appropriate medications and therapies used to lower fat levels in the body caused by the underlying disease, can reduce the number of xanthomas. The fat deposits will dissolve by themselves with progressive treatment and the skin’s appearance in the affected region will return to normal. Along with the suitable treatment, changes are necessary in the diet and lifestyle with healthier foods being included in the diet and increased physical activity.

Removal of xanthomas on eyelids is often carried out using topical trichloroacetic acid. The acid is used in varying concentrations (up to 70%) depending on the extent of the plaques on the eyelids. Thorough exfoliation is achieved to get rid of xanthomas palpebrum from the skin around the eyes and reveal healthy, fresh skin present below. The skin around the eyes is sensitive and this treatment should not be carried out at home. Only an experienced dermatologist should perform the treatment to avoid any side effect or irreparable damage to the skin

This is a safer method when compared to electrodessication as the intensity of the laser energy can be controlled by adjusting the wavelength or the type of laser being used. The laser light is used for skin ablation which is basically removing the top layers of the skin that are affected. Once the skin heals, the area that is treated has renewed skin instead of the yellowish plaques. Eruptive xanthoma treatment is often performed using this method. The risk of scarring and other side effects like hypopigmentation are minimized when the treatment is performed using US FDA approved equipment and by trained dermatologists.

Studies have shown low voltage radio frequency treatment is effective in case of xanthomas near the eyes or eyelids. It helps in remodeling the skin by stimulating newer collagen and elastin production as heat from RF stimulates cells in connective tissues. It is safe on human eyelids and studies have suggested it as one of the most effective treatment

Using liquid nitrogen, very cold temperature is used to remove the xanthomata outgrowths on the skin. Due to extremely low temperature they get removed from the skin.

An electric needle is used to scrape away the plaques and papules from the skin’s surface formed due to different types of xanthomata such as Achille’s tendon xanthoma or xanthoma tuberosum. This treatment poses the risk of scarring after the treatment is performed

When the xanthomata cannot be treated using the above methods, such as in the case of nodules forming on the skin, surgery or excision of the lesions may be required to remove the affected skin. Scarring is very common with this treatment and there is also the chance of an infection developing if the excision is not performed under sterile conditions.

People with high levels of cholesterol and triglycerides, and low levels of HDL in the body are at a higher risk of developing tuberoeruptive xanthomas. Rare conditions like cerebrotendinous xanthomatosis, homozygous hypercholesterolemia, and b-sitosterolemia also increases chances of developing this type of xanthomas.

Xanthomas eye is a common term used for xanthomas palpebrum. Yellowish lesions form on the upper and lower eyelids in this skin condition.

The fat deposits are yellowish in appearance on the skin and can be in the form of lesions or plaques in most types of xanthelasma. Nodules are seen in the xanthomas tuberosum type.

Xanthalesma is a skin condition that should not be ignored and should be treated as soon as possible. Identifying the underlying disease or disorder causing the fat deposits to form is vital for appropriate treatment course to be initiated. Take advantage of cosmetic treatments available to remove xanthomas and use them while you are undergoing the treatment for the causal disease.